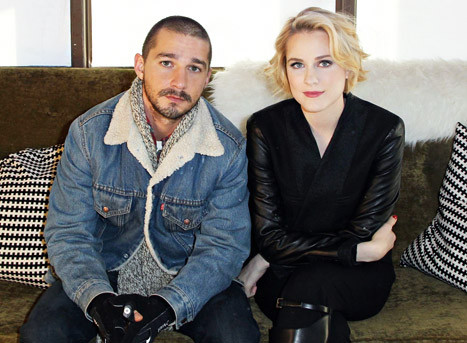 In his new filmNecessary Death of Charlie Countryman,Shia LaBeouf plays a character who trips on acid. To make sure his depiction was accurate, LaBeouf dropped acid and filmed himself -- and then asked costarEvan Rachel Woodfor pointers!

During an interview withMTV at Sundance Film Festival in Park City, Utah for the mafia film, LaBeouf, 26, admitted he was "scared" to a play character who trips on acid because he'd "never done acid before." So, he decided to try it out for real and film his trip.

"I remember sending Evan tapes," he said. "I remember trying to conjure this and sending tapes and Evan being like, 'Yeah, that's good, but that's not, but this is, but that ain't.'"

"Not like I would know about these drugs!" Wood, 25, who is currently expecting her first child with husband Jamie Bell, interjected.

"Not like she's the expert on set," LaBeouf explained. "I'm just saying you reach out to friends and you sort of gauge where you're at. So I was sending tapes around. I'd get fifty percents from people, and that starts creeping me out, and I got really nervous. Towards the end, I was like . . ."

"It was spot on," Wood told her costar.