Bimbo and retard Miss California does Ad against Gay Marriage

THE BITCH IS TRYING TO HOLD ON TO HER 15 MINUTES OF FAME... 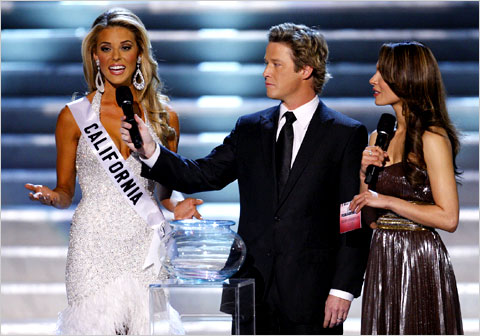 Miss California USA. may have been tossed into the scuffle over same-sex marriage, but she has become a willing warrior in the fight.

Carrie Prejean – who gave a now-famous response to a question about gay marriage at the recent Miss USA pageant – is featured in a new advertisement from the National Organization for Marriage, which says its mission is “to protect marriage and the faith communities that sustain it.”

The advertisement, which accuses same-sex marriage backers of trying to silence opponents like Ms. Prejean, is the latest step into advocacy for the 21-year old Miss California. Ms. Prejean told NBC’s “Today” show on Thursday morning that she does not regret becoming involved in the back-and-forth.

“I’m going to do whatever it takes … to protect marriage,” said Ms. Prejean, who started giving interviews to the news media shortly after the Miss USA pageant. “It’s something that is very dear to my heart.”

Supporters of gay marriage immediately hit back at the advertisement, while officials affiliated with the state’s pageant said they were disappointed with Ms. Prejean.

The president of the Human Rights Campaign, Joe Solmonese – who is seen calling gay marriage opponents bigots in the advertisement – retorted in a statement that the National Organization for Marriage’s “relationship with the truth could use some help.”

“As far as my cameo, I appreciate them emphasizing my point that when debating the merits of this issue they only have lies on which to rely,” Mr. Solmonese said.

In a statement, Miss California USA pageant officials said “in the entire history of Miss U.S.A., no reigning title holder has so readily committed her face and voice to a more divisive or polarizing issue.”

Posted by Unknown at 5:07 PM No comments: 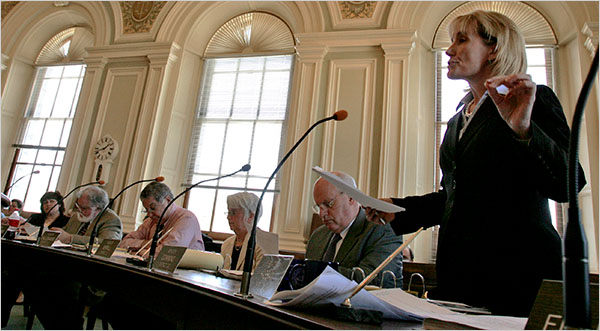 CONCORD, N.H. — The New Hampshire Senate voted narrowly on Wednesday to legalize same-sex marriage, paving the way for the state to potentially become the fifth in the nation — and the third this month — to allow gay couples to wed.

The Democratic-controlled Senate voted 13 to 11 in favor of the bill, but only after a last-minute amendment strengthened language granting legal protections for religious groups and organizations that do not want to perform or help carry out same-sex marriages.

The House, which approved the marriage bill by a seven-vote margin last month, must vote on the Senate’s amended version. But supporters and opponents predicted that version would pass the House, which is more liberal and was more enthusiastic about same-sex marriage from the start.

It is unclear whether Gov. John Lynch, a Democrat, will veto the bill or whether the new language will persuade him to endorse it. The bill probably cannot gain enough support in either house for an override, so its fate almost certainly rests with Mr. Lynch.

The governor has consistently opposed same-sex marriage, but he could also let the bill become law without his signature. Mr. Lynch did not reveal his intentions after the Senate’s vote but restated his belief that the state’s two-year-old civil-union law provides sufficient rights and protections to gay couples.

“To achieve further real progress,” he said in a statement, “the federal government would need to take action to recognize New Hampshire civil unions.”

The Defense of Marriage Act, passed by Congress in 1996, prohibits the federal government from recognizing same-sex marriage. It denies federal benefits, like Social Security survivors’ payments, to spouses in such marriages.

Brian Brown, executive director of the National Organization for Marriage, which was established to fight same-sex marriage around the country, said the group would intensively lobby Mr. Lynch to veto the bill.

“This vote is in no way representative of what folks in New Hampshire want,” Mr. Brown said, adding that the Senate leadership had used “arm-twisting” to change the votes of a few crucial Democrats. “If the governor is going to stand by his words,” he added, “he will veto this bill.”

To some extent, the support for same-sex marriage reflects a sea change in New Hampshire politics since 2006, when Democrats gained control of the legislature for the first time in over a century. While staunchly conservative on fiscal matters, New Hampshire has been less so on social issues, partly because its residents’ famous libertarian streak resists government intrusion in personal matters.

But last-minute politicking also played a role in the Senate’s vote. Last week the Senate Judiciary Committee voted 3 to 2 against the marriage measure, and the committee’s chairwoman, Senator Deborah Reynolds, a Democrat, said afterward that New Hampshire was simply not ready for same-sex marriage.

Ms. Reynolds, the only Democrat who opposed the bill in committee, emphasized that civil unions were still new in New Hampshire and that Vermont, whose legislature approved same-sex marriage on April 7, had done so only after living with civil unions for nine years.

But on Wednesday, Ms. Reynolds, who represents a fairly conservative region, said the new language made the bill acceptable. She described it as a compromise that was “respectful to both sides of the debate and meets our shared goals of equality under the state laws for all of the people of New Hampshire.”

Gov. Jim Douglas of Vermont, a Republican, vetoed that state’s same-sex marriage bill, but the Democratic-controlled legislature overrode his veto, making Vermont the first state to adopt same-sex marriage legislatively instead of through the courts. Days earlier, the Iowa Supreme Court found a state law banning same-sex marriage to be a violation of the State Constitution.

In New Hampshire, more than 650 same-sex unions have been registered since they became legal in January 2008.

Same-sex marriage was among several contentious bills that the Senate took up Wednesday, all passed by the House in recent weeks. One, a measure to allow people with certain illnesses to possess marijuana for medical purposes, passed in a vote of 14 to 10. But the Senate voted unanimously against a bill that would guarantee transgender people protection from discrimination in housing and employment. It also put off action on a bill to repeal the death penalty.

Opponents of same-sex marriage appeared better organized here than in Vermont. Cornerstone Research Institute waged an intense phone campaign with help from the National Organization for Marriage, but the New Hampshire Freedom to Marry Coalition and other gay-rights groups also lobbied fiercely.

“It is in keeping with New Hampshire’s live-free-or-die tradition to stand up for individual liberties and against discrimination of any kind,” Ms. Baxley said.

“I have to say,” she added, “America is at a turning point.”

Posted by Unknown at 5:03 PM No comments:

Former Backstreet Boys member Nick Carter is back in tip-top shape after being diagnosed with a potentially fatal heart condition eight months ago. Here’s what the 29-year-old healthy and sober singer told people People:

On the Hollywood scene party scene and all-night clubbing: “I would get tired because we were partying so much, so I would do a bump [of cocaine] just to wake myself up. I would be that person who would stay at these clubs till the lights come on and they’re playing, ‘Don’t Stop Believin’.’ People are looking at me going, ‘Is that Nick Carter?’ And I’m like, ‘Yeah, it’s me gacked up.’”

On getting his life back on track: “I’m trying to make myself better. But I don’t regret anything that I’ve gone through, because it makes me who I am.”

On the salesgirl he’s been dating for the past few months: “I don’t believe in marriage [but I see myself starting a family] someday, a little ways down the line.”

On his two-story, colonial-style home just outside Nashville: “I had to get away from the temptations [in L.A.].”

source justjared
Posted by Unknown at 1:54 PM No comments:

Posted by Unknown at 1:49 PM No comments:

Sean Penn files for divorce. For real this time.

Sean Penn has filed for divorce from Robin Wright-Penn, and this time he means it. TMZ reports:

According to papers filed last week in Marin County Superior Court, Penn cites "irreconcilable differences." The couple was married 13 years and has two minor children.
Penn wants each party to pay for their own lawyers. And, he checked the box saying he wants the judge to terminate the court's power to award spousal support.
The couple announced they were divorcing in December 2007 -- but recanted four months later after changing their minds.

Of course, if I had sex with Natalie Portman, I'd probably get a divorce, too. But then again, why bother having sex again after that? Everything else will just pale in comparison, so you might as well stay married and never have sex again. Stop me if I'm making too much sense

It got really hot in Miami today ... when soul singer John Legend took his shirt off.

The 30-year-old crooner has an amazing body of work.

Ryan Gosling appears to be moving on from his on-again, off-again romance with Rachel McAdams. The star of “The Notebook” was spotted the other night having a romantic dinner date with a mystery model at Da Silvano. Says a witness: “They arrived at 9 p.m. and sat quietly in the back of the restaurant enjoying intense conversation before exiting at around 11:30.” McAdams has been spotted doing yoga and going apartment-shopping with actor Josh Lucas. Derek Jeter Is Leasing A Different Kind Of Box

Derek Jeter has so many friends and family who want to see him and his teammates play, the Yankee captain leased a luxury suite for the season in the new stadium. A team spokesman said the box was big enough for 12, but wouldn’t say how much it cost. But he said that Jeter, one of the highest-paid players in the Major Leagues, paid full price for a suite of its size, which range in cost from $600,000-$850,000 — and he didn’t even get an employee discount. Joe and Zachary Quinto
Posted by Unknown at 10:11 AM No comments: Posted by Unknown at 6:12 PM No comments:

Posted by Unknown at 6:11 PM No comments: